The delightfully unusual flower of our native wildflower, Jack-in-the-Pulpit is a spring woodland favorite usually growing 16-20" tall. It is a charming plant with very unusual foliage and flower. The unique shape and color of Arisaema triphyllum make it an excellent choice for the shade or woodland wildflower garden where it should be planted in rich soil and shade to partial shade.

The foliage is distinctive, its leaves being held on a long dark green stalk and divided into three. This unusual foliage & flowers of Jack-in-the-Pulpit plants will be an exotic & excellent addition to the shade garden. One to three compound leaves with green and purple sheath surround the flower spike. Bright orange-red berries follow the flowering in the fall.

All of our woodland plants grow naturally on rich, moist forest floors and are perfectly suited for your shade garden. Add them to an existing wooded area or create your own woodland garden. Dappled shade and humus-rich soil provide perfect growing conditions. 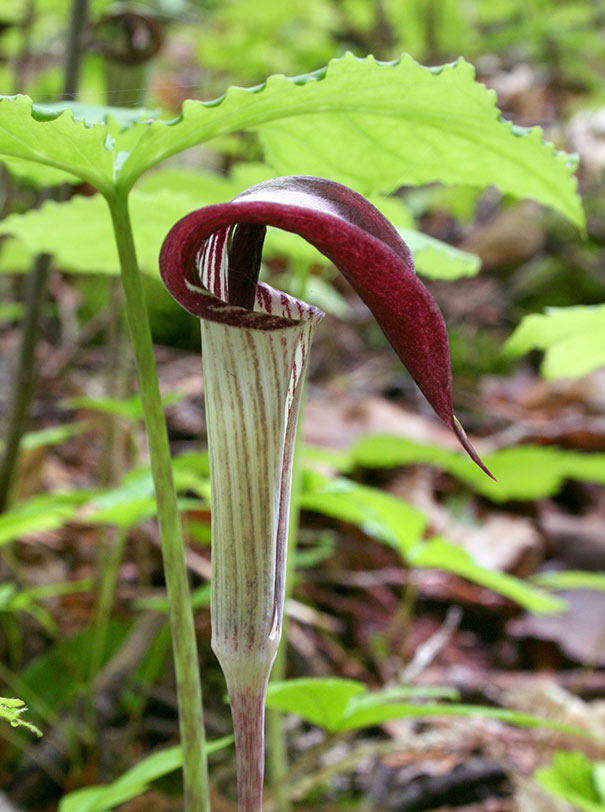 General Characteristics: Best left undisturbed in the shady woodland garden, wild garden or native plant garden. Flower structure consists of the spadix (Jack) which is an erect spike containing numerous, tiny, green to purple flowers and the sheath-like spathe (pulpit) which encases the lower part of the spadix and then opens to form a hood extending over the top of the spadix. The outside of the spathe is usually green or purple and the inside is usually striped purple and greenish white, though considerable color variations exist. Two large green, compound, long-petioled leaves (1-1.5' long), divided into three leaflets each, emanate upward from a single stalk and provide umbrella-like shade to the flower. The fleshy stalk and leaves lend an almost tropical aura to the plant. Most plants in a colony will vanish by mid-summer (become dormant), but the mature, hermaphroditic flowering plant will produce a cluster of red berries in mid to late summer which becomes visible as the spathe withers.

Planting Instructions: Native wild Arisaema triphyllum, (Jack-in-the-Pulpit) plants should be planted in fertile rich, medium wet to wet soil and in part shade to full shade. Needs constantly moist soil rich in organic matter. Does poorly in heavy clay soils. Dig a hole large enough to hold the roots. If any roots seem tightly bound, loosen before planting. Fill the hole with water and position the plant so the crown (where the roots meet the stem) is just slightly below the soil line. Fill the hole with soil and water again.

Pests or Diseases: No serious insect or disease problems.