'Elite' is a fiery orange Asiatic lily, featuring clusters of attractive flowers at the top of each stem. This lily generally grows to about 3' tall and begins to bloom in late June to early July.

Hardy perennial that will multiply year after year when planted in the garden. As soon as the bloom has faded, remove it so seeds do not form. Do not remove too much stem and foliage with the blossom as these are needed to build for the next year's growth. Ideal for planting in the perennial garden, in containers or for cut flowers. These lilies are simply stunning in mass and are a great accent plant individually. They are of sturdy habit and do not require any support. Ideal for very exposed gardens. 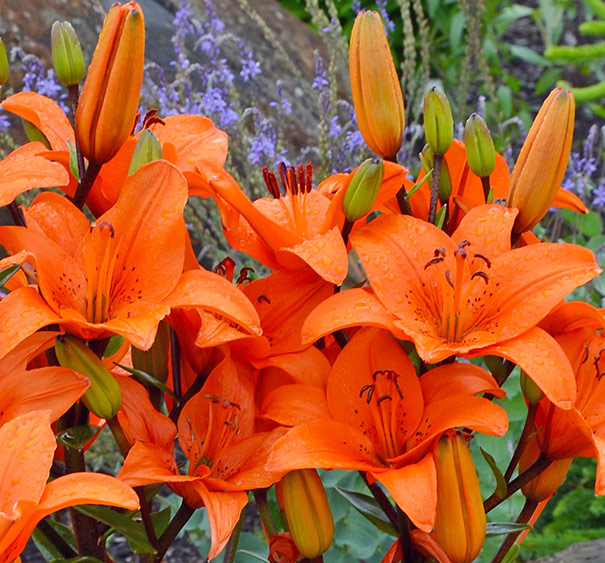 General Characteristics: Asiatic lilies are hybridized lilies which are famous for their vigor. An Asiatic lily is a lily in the genus Lilium. Plants in this genus are sometimes referred to as “true lilies,” reflecting the fact that they are botanically classified as lilies, rather than just being called “lilies” by people who are not knowledgeable about horticulture. True lilies are bulbs, and they have fleshy stems, blade-like leaves, and trumpet-shaped flowers. The Asiatic lily is among the easiest to grow. Given an area which gets sun for at least half the day and some well-drained soil, these lilies will flourish with minimal effort on the part of the gardener. They typically return in very thick clumps each year, requiring thinning every three to four years to break up the bulbs and spread them out so that they will not crowd each other in the soil.

Planting Instructions: Plant in spring, after the ground, warms to about 50º F. 1. Dig a hole 6" deep. 2. Place bulb in the hole pointed side up. 3. Cover with soil and water thoroughly. Plant in late spring 6" deep in any well-drained soil in sun or partial shade. Supply moisture and ample organic material through the growing season and mulch to keep roots cool & moist. As soon as the bloom has faded, remove it so seeds do not form. Allow stems to die back naturally in the fall. Divide every 3-4 years. Hardy Lily is one of the few summer flowering bulbs that may be left in the ground over the winter and still continue to bloom year after year each July. Excellent cut flowers but do not remove too much stem and foliage with the blossom as these are needed to build for the next year's growth.