'Yukon Gold' potatoes are the most famous of the new wave of yellow-fleshed varieties now available. Long popular in Europe, these have good flavor and moist flesh, which many people claim requires less of the fattening condiments required by some potatoes. 'Yukon Gold' is a very early bearer of large, round, attractive potatoes with a hint of pink around the eyes. Many grocery stores around the country now feature some name-brand version of "golden" potatoes, usually this variety. If the flavor of these potatoes suits you, you will love having 'Yukon Gold' right in your garden.

'Yukon Gold' is a well-known and old cultivar. It stores well. It has yellow flesh, and is quite resistant to viruses. Potatoes are perennials grown as annuals. They are related to eggplant, tomatoes and peppers. Potatoes need a frost-free growing season of 90 to 120 days. They are a cool weather crop and grow best in areas with a cool summer. Ideal potato growing temperature is between 60 and 70 degrees F. Hot weather reduces potato production. Traditionally, potatoes are grown in the summer in the North and during fall and winter in the South. Potatoes are grown from whole potatoes or pieces called seed. Each seed must have at least one eye. Potatoes must have well-drained, fertile soil that is higher in organic matter and having a pH between 5.0 and 5.5. Plant in full sun, 4 inches deep and 18 inches apart in rows that are 3 feet apart. Potatoes are usually planted on hills or raised rows, to allow for drainage. Fertilize again around mid-season. Even moisture and a good thick layer of mulch will result in a better crop. Harvest time ranges from 75 to 130 days after planting. Dig up new potatoes after the plant blooms, or if it doesn't bloom, after the leaves start to yellow. Potatoes that are sold in grocery stores are usually dug two weeks after the vines have died in the fall. Rotate crops to prevent pest build-up in the soil.

POTATOES ARE EASY TO GROW VEGETABLES. One of the easiest root crops to grow is the potato. Plus, they're fun to grow. A small area can provide a nice yield of this tasty vegetable. Early spring is the best time to plant them. One of the bonuses of growing potatoes is that you can eat them at various stages of growth. The young 'new potatoes' are often harvested and cooked with peas and gravy, while most are allowed to reach maturity and are eaten or stored for use throughout the winter. 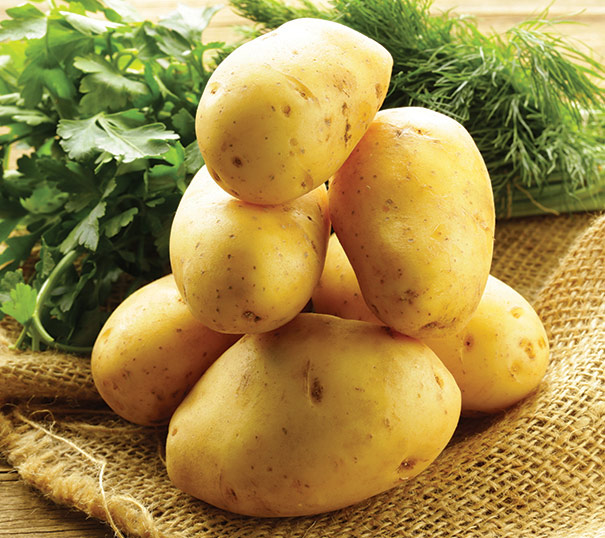 General Characteristics: Yukon Gold is a large cultivar of potato most distinctly characterized by its thin, smooth eye-free skin and yellow-tinged flesh. This potato was developed in the 1960s by G. R. Johnston, R.G. Rowberry, and Dr. Norman Thompson in Guelph, Ontario, Canada at the University of Guelph. The official cross was made in 1966 and 'Yukon Gold' was finally released into the market in 1980. Unlike some other potato cultivars, 'Yukon Gold' can stand up to both dry-heat and wet-heat cooking methods. Its waxy moist flesh and sweet flavor make it ideal for boiling, baking and frying but these potatoes will also withstand grilling, pan frying, and roasting.