The Serviceberry is self-pollinating, with white and light pink flowers in early spring followed by purplish red berries in summer. It is not a true blueberry but tastes like one. The tiny edible fruit is popular with birds, including American Goldfinch, tufted titmice, brown thrashers, blue jays, Carolina chickadees, northern cardinals and American robins. Serviceberries taste the way they look: like red blueberries. They can be used in jellies, cobblers, pies, muffins, coffee cakes or as dessert toppings. Plants will begin to produce fruit 2 to 3 years after planting. In the fall, the Serviceberry has lovely yellow and gold foliage.

If you're looking to attract Birds and Wildlife to your landscape, look no further than De Groot, Inc.'s plant group. The characteristics that make these species so visually appealing – showy flowers, stunning fruit, winter color – are some of Nature's most powerful draws for the animal kingdom.

Turn your yard into a naturally balanced eco-system! Whether you choose one variety or one of each, you're sure to enjoy these plants for a lifetime. They provide food, shelter, and nesting. Plant your backyard sanctuary today! 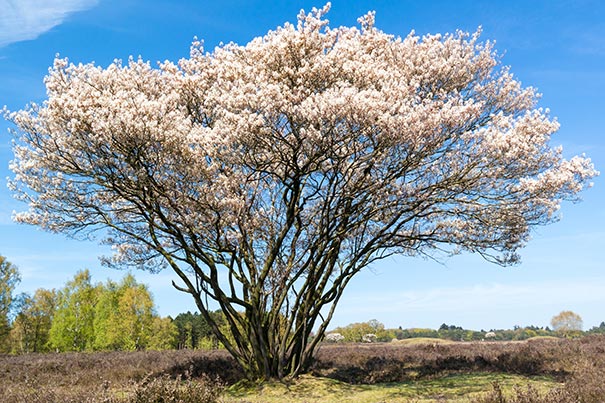 General Characteristics: Serviceberry is a small deciduous tree or shrub with attractive white spring blossoms that provides year-round interest in the landscape, as well as producing edible fruits. They have small, oval, or elliptical leaves with finely toothed margins and downy undersides. Serviceberries can be naturalized at the edge of woodlands or used in many different ways in the landscape. They are equally useful as a specimen plant or in small groupings. They look particularly nice when planted against backdrop of darker foliage, such as evergreens that allow the flowers, colorful fall foliage and grayish bark stand out. They can also be used in shrub borders, as screens or as an unsheared hedge. The species native to boggy areas do well near water gardens. The name serviceberry is derived from the practice of isolated mountain communities in early America to postpone funeral services for those who died in the winter until the spring when the ground was no longer frozen. The flowers of the tree, the first to bloom in the spring, were gathered for church services. Serviceberries cast light shade and their roots aren't invasive, so other plants, such as perennials that prefer partial shade, can easily be planted under them.

Planting Instructions: The Serviceberry likes sun to partial shade. They should be planted in rich, moist, well-drained soil. Dig a hole large enough to encompass the roots without bending or circling. Set the plant in place so the crown (part of the plant where the root meets the stem) is about 1-2 inches below the soil surface. Cover with soil to the original soil surface and water thoroughly.